On Rosh Hashanah, which begins tomorrow at sundown, Jewish people will begin our annual period of spiritual renewal. It’s a beautiful holiday, as is this whole season. In my childhood Rosh Hashanah was, after Passover, my other favorite Jewish holiday, but I’ve lived long enough, and through enough, that it has become my number one. In spite of my not having a local community to celebrate with, I always find a way to observe it.

Last week I gave you a story about apples. Today, a few brief words about plums, another traditional fruit at this time of year. END_OF_DOCUMENT_TOKEN_TO_BE_REPLACED

An Affair To Remember

Whenever she felt like expanding her cooking repertoire my mother, who was raised on Ottoman Sephardic food, naturally gravitated toward recipes that reflected her cultural sensibility. In cookbooks and the magazine pages of mid-century America, she found much inspiration in things French.

America’s love affair with French cuisine took off like a rocket in the early 1960’s under the influence of Julia Child, but the relationship was already well established. As recent immigrants to New York in the early 20th century, my grandfather and his brothers, all fluent in French, became salesmen for Nabisco,

My dapper papu & his brothers wore straw boaters like these on their sales calls for Nabisco. This isn’t them, but the guy on the lower right looks a lot like like my papu!

which in those days catered to the city’s finer hotels and restaurants where the language, like the fancy food, was French. (Fun fact: Nabisco’s New York operation was housed in the complex that is now the Chelsea Market on Ninth Avenue & 15th Street). My grandparents, of course, had received a French education in Turkey, where they’d attended the schools of the Alliance Israélite Universelle. French culture was already a comfortable fit for them when they arrived here from Rhodes.

To the delight of her family and friends, my mother knew how to pick winners and she turned them out beautifully. END_OF_DOCUMENT_TOKEN_TO_BE_REPLACED

A Sephardic American Cookbook To Sink Your Teeth Into

Whenever Sephardic food is mentioned, our thoughts typically go straight to baked goods. This is where Linda Capeloto Sendowski has focused her first cookbook, Sephardic Baking from Nona and More Favorites.

Linda Sendowski grew up in Seattle in the 1950’s, luxuriating in the tastes and aromas of her mother’s and grandmother’s traditional Sephardic kitchens. Her own baking reflects that environment in the best possible way; the book invites you to experience Sephardic baking as warm and welcoming comfort food, a beautiful, rustic treat for all the senses.

What constitutes Sephardic food? Beyond the traditional recipes so easily recognizable as “ours” – the borekas, boyos, haminados, etc. – our cuisine has been shaped by religion, migration, and a complex history. We are not just cooks; we are guardians of our culture and heritage. This responsibility always weighs on the mind of a serious Sephardic cook. Yet we are also enthusiastic assimilators. Both spirits are at work in Sendowski’s recipes.

The majority are classics from Çanakkale and Rhodes, with a few Sephardic and Ashkenazi selections from other continents, and others of her own invention. Everything comes together through Sendowski’s filter and the sure hand she inherited from her mother, whose memory and bendichas manos she lovingly honored by making this book. END_OF_DOCUMENT_TOKEN_TO_BE_REPLACED

Filed under Other Reading, Recipes

And it’s yet another Jewish New Year, this time in celebration of nature. Nice, huh. Today Tu B’Shvat is referred to as the New Year of the Trees, but its celebratory roots are in 16th century mysticism and the arrival of springtime. That’s got to seem pretty crazy in late January, especially if you’re anywhere on the East Coast right now and buried in the weekend’s massive snowfall. Over here in the Barcelona hills, the ground may still say winter but the almond and mimosa trees have already been in full bloom for two weeks. Granted they’re way ahead of schedule this year, but it is normal for daffodils to push through the earth in February, and to see and feel springtime well on its way to returning. 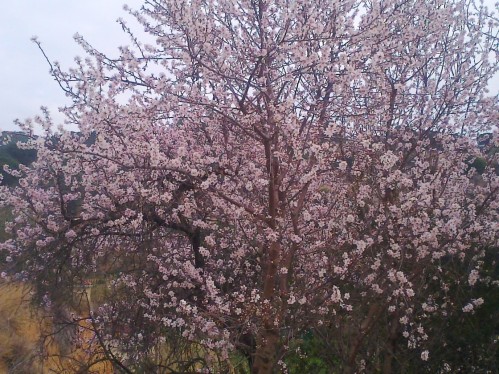