A shaman’s guide to the Exodus

Three years ago, I sat in a fluorescent orange kitchen in the northwestern corner of Spain one bleak, gloomy, miserable day in March, pouring over a then-new book about Passover, whose very existence drove home to me how very far I had roamed from my culture in search of my roots. Three weeks later when the holiday arrived, missing my family and my traditions for one season too many, I decided I was celebrating Passover however I could, no matter what.

Deeply embittered and still in shock after losing everything I had – including an eye – to cruel events in Catalunya, I had embarked almost a year earlier on the newest phase of an open-ended roots journey around Iberia, hoping for any information that would explain why Spain kept beating me to a pulp, wondering what terrible thing my Spanish ancestors must have done for my karma to be so unrelentingly awful in my adopted country, because there was no rational explanation for any of it. 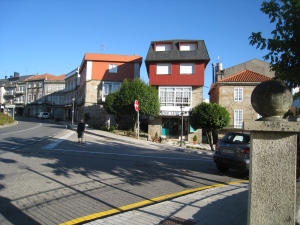 By August of 2017 I was living deep in ancestrally hostile territory, obscuring my identity more and more the longer I was there, just to get by in a remote corner of Galicia where, based on my brushes with extreme antisemitism, psychopaths, and a powerful  personal aversion to the regional cuisine (traif on steroids) that felt, on a psychic level, like a matter of life and death, I knew I had connected at the most visceral level with the persecution terror of centuries past that was so obviously encoded in my DNA. I lived with a constant underlying fear of being found out and cast out, and in this tiny town of a few thousand, that fear had so overtaken me that I even went to a church mass one day during Christmas season to keep up appearances. To my utter dismay, I became a full fledged Crypto Jew. In the 21st century. It angered me, but in that place it seemed the only way. Sitting down discreetly at the back of a cold, dank, miserable church and hoping in vain to at least be rewarded with a pretty hymn or two, instead I sat through an antisemitic sermon about, of all things, Passover.

This all felt too big, too old, and too sad a problem for me to dwell on anymore. I threw myself into the healer’s training I’d begun a few years earlier – shamanism, mysticism, and constant communion with Nature, which in that corner of Spain is magical. I got spiritual. Which is a very good place to be.

My dog, Louise, in our favorite spot at the forest’s edge.

But old habits die hard. Three months later, alone in that soulless kitchen I was longing for family and this joyful holiday that celebrates freedom from oppression. I felt both nostalgic and pissed off enough to make a Seder for one, even if it might blow my cover and push me even further into isolation. My landlady was a big gossip in a small provincial town with an antisemitic priest, but I was fed up and determined. I was on my ancestral turf, and it was my holiday! I gathered what I could use from the cupboard, rolled up my sleeves and cooked at breakneck speed, with excuses at the ready lest she suddenly appear and catch me in flagrante delicto, flipping burnt matzas in a pan.

My food came out truly awful!

In a better frame of mind I would have laughed about it, but in that moment I was in too much of a sweat. I cooked, threw together a Seder plate, recited what I could remember of the Haggadah, raced through the rituals, washed the dishes and put everything away. Everything.

If all that remained for me was resentment and a very reasonable fear of ostracism, again I saw no reason to keep clinging to that identity.  I dropped all pretense, threw in the towel, and closed the door on my heritage. I didn’t want to even think about it anymore, let alone engage or write about it. Me perdí la gana.

I stopped feeling a need to pry into my ancestors’ mysterious lives, deciding it was enough to skip the details and make a quiet peace with them. But they were a bitter, angry bunch who didn’t seem so inclined. In dreams they came to me as sharks and growling dolphins who warned, stay away, leave us to our bitterness. One dolphin sported a pig snout. I can only imagine. In the end I gave them what they wanted, and turned my back on them altogether. I wanted them to leave me alone, too, to tend to my own wounds.

I should have known that would never work for a family named Beloved.

Portugal brought no relief. I was in and out, like so many Spanish Jews before me. Like a dog on a short chain, back to northern Spain I went, to my ancestors’ ground zero, wondering how on earth to break free of their bitter grasp. And then a door opened in Seville.

Seville is a beautiful city, loved for its flamenco and Feria and over-the-top Semana Santa processions, but mostly for its gracious, sunny, openhearted people and a special light, captured to perfection by the painter, Murillo (but not by me, alas!). It seems impossible that Seville is  where, in just one day in 1391, violent mobs massacred the city’s entire Jewish population of thousands, unleashing a year-long wave of brutal terror that made its way around the entire Spanish kingdom. It seems so odd that in Seville I never felt the tiniest hint of antisemitism, or of my highly charged genetic memory. But I have no personal ancestry in Seville. No energetic connection. It was in gracious Seville that I finally made cuajado and mina and artichokes and harosi again without holding my breath, and invited friends to enjoy them with me without hesitation.

It was also in Seville I performed a shamanic healing for the city itself that, to my surprise, freed hundreds and hundreds of souls who had been shocked by the terror of that unimaginable day in 1391 and run for their lives ever since, unable to move on. So many terrified souls. (And yes, Seville is a restless city). In a park beside the Guadalquivir one day I opened a portal to the upper realm and watched in amazement as they began to arrive and ran in droves toward a column of white light and were lifted upward, eyes wide and mouths agape in awe, sprouting wings and at last following the light homeward. “Go, go on home,” I encouraged them. My heart was full. They were freed and healed, and so was I – or at least I came a good deal closer. Certainly a corner was turned that day. In healing others, we heal the self.

Spain has a deeply flawed history, but it’s a varied and beautiful country. My bitter ancestors’ big secret wasn’t some scandal, it was that they were heartbroken and so afraid.

I am not the person I was when I began this journey. That was the very point of it. I didn’t know that when I set out.

In Jewish teaching the heart is the seat of wisdom. With my own heart renewed, and only recently – finally! – having found compassion for these unknown ancestors who made my life hell for so long, I feel ready to be in the world again. I have had mad experiences and sad and shocking revelations but also such beautiful ones, just like they did, of real magic and miracles and lovely days and gratitude. I got there there through fierce and often painful determination to find, know, live what was good, to stop being mad at them for staying stuck in their fear and resentment and passing it on to my DNA, and to finally realize they could do no better because they simply didn’t know how. That was my job. To make peace with their past, with them, for them. But before I could release them from their suffering – and in so doing, myself from mine – I had to walk in their shoes. For some reason, I was called to do so as literally as it gets. For years I ricocheted around this country like a pinball from one rented room to the next, with one eye gone and the other seriously compromised and a precious, old dog my one constant companion until she died, unable to prosper, living like a refugee in a country that declared me a permanent resident but never let me settle anywhere.

For me, the healing, the breakthrough, the excision, could only happen through direct experience. I do get to keep all the good parts, though. A shaman takes on ills to transform them. I understand now – really right now – that I was called to be a shaman for this specific assignment. Why me? I don’t know. That’s a question for the soul about one’s higher purpose, something I’ve often pondered, especially in the bleaker moments of this very long journey.

In my whole life it was never enough for me to to just read about the Exodus. It was too remote, to abstract. But I sure can tell you now about wandering in the wilderness for many years, if not forty, and arriving in at least a very nice place to be, if not exactly the Promised Land. For the time being I am back in Seville after eight months on the southern coast where, for a welcome change my only connections with the place were to a stoical seagull with a maimed wing (I learned so much from her), a local mountain that is a giant repository of my beautiful birthstone, and to the sea itself, the great cleanser of wounds.

It is nice to be back in Seville. I only arrived three days ago, and it was an unexpected destination. Spain is still under curfew, so I will be alone on Passover again this year. But my precious holiday recipes are out of the mothballs, I will cook as I like, a la muestra, will take my time to make the nicest solo Seder I can, and think about all I’ve experienced and learned and am grateful for. This year, it’s all good.

2 responses to “A shaman’s guide to the Exodus”