An Affair To Remember

Whenever she felt like expanding her cooking repertoire my mother, who was raised on Ottoman Sephardic food, naturally gravitated toward recipes that reflected her cultural sensibility. In cookbooks and the magazine pages of mid-century America, she found much inspiration in things French.

America’s love affair with French cuisine took off like a rocket in the early 1960’s under the influence of Julia Child, but the relationship was already well established. As recent immigrants to New York in the early 20th century, my grandfather and his brothers, all fluent in French, became salesmen for Nabisco,

My dapper papu & his brothers wore straw boaters like these on their sales calls for Nabisco. This isn’t them, but the guy on the lower right looks a lot like like my papu!

which in those days catered to the city’s finer hotels and restaurants where the language, like the fancy food, was French. (Fun fact: Nabisco’s New York operation was housed in the complex that is now the Chelsea Market on Ninth Avenue & 15th Street). My grandparents, of course, had received a French education in Turkey, where they’d attended the schools of the Alliance Israélite Universelle. French culture was already a comfortable fit for them when they arrived here from Rhodes.

To the delight of her family and friends, my mother knew how to pick winners and she turned them out beautifully. For one special party she mastered cream puffs (though to my bitter disappointment, she didn’t stick with them much past that). For cocktails with friends she’d make her French onion tart, a decadent cross between quiche and cuajado that she’d found she knew not where – probably in House & Garden. Some fifty years later I sat reading a book on Jewish cooking in France, and there was Mom’s recipe, identical in every detail. All that time she’d been feeding us the onion tart that André Soltner served at his legendary New York restaurant, Lutèce. (Thanks, Mom!).

Another recipe that became an instant and permanent family favorite was a simple, delicious apple dessert she picked up from the 1955 Pillsbury Bake-Off, of all places. “Apple Impromptu” was its name, a quick and easy dish of sliced baked apples with a light, slightly chewy batter spread across the top, scented with vanilla and a scant dusting of cinnamon. Apple Impromptu was a competition finalist, not the winner, which was a good call by the judges. If its faux French name exposed the recipe’s lofty aspirations, a French original did exist and it was superior. Years after Mom began making Apple Impromptu, my aunt employed a French housekeeper who now and then used to make an apple cake for the family. Mireille’s apple cake was very similar to my mother’s, but we had to admit really a step up. She used Cointreau, not cinnamon, and the batter had a marvelous overall texture that somehow bettered Mom’s (though we surely loved hers, too).

For years my aunt guarded her French housekeeper’s recipe like a state secret. When I finally was given a copy of it decades later, sure enough, it was nothing more than a glorified Apple Impromptu. Or more to the point, Apple Impromptu was a dumbed-down version of it. I had a good laugh over that. We’d all been thrown off the trail by its more meticulous preparation. (Mireille, like André Soltner, came from Alsace). Aunt Rady also had put her fine stamp on it, as one does, expertly correcting some questionable measurements and adding – or more likely adding back – the vanilla extract that was curiously absent from the handwritten instructions she’d been given.

The delicious dessert was worthy of a restaurant, and I served it in mine to many a happy customer. 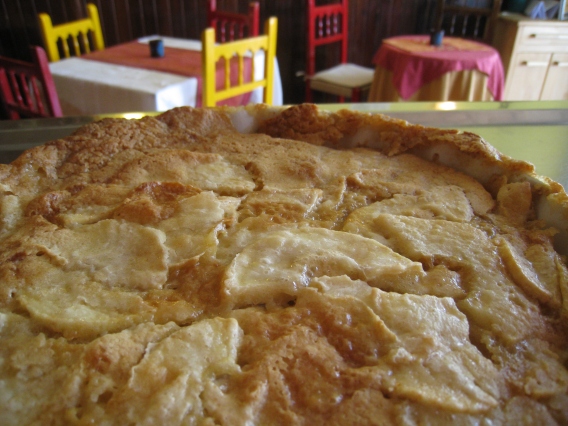 America has discovered so many foods and flavors through the French, that we naturally think of them as being, well, French. But they’re not all entirely that. French cooks, like Sephardic ones, are masters at singling out tastes and textures from other cuisines that blend so seamlessly with theirs as to become their own. (For more on that theme, see this post about Sephardic American cooking). Given the histories of European trade and Sephardic migration, it should come as no surprise that quite a few “French” foods and flavors were introduced to France by the Sephardim – as vanilla was in the 16th century, and which the French embraced rather passionately and permanently. I sure get that! To my own family’s way of thinking, if there’s no vanilla in the batter, there’s no point in baking it.

If plums are one Rosh Hashanah dessert tradition, in our family we also welcome apples – not dipped in honey (puh-leez!) but baked into our beloved French apple cake. Anyway, such a delicate batter gets a little lost beside the bolder flavor and texture of plums, or other stone fruits for that matter. (I use a different dough for them). Pears work, but the New Year calls for apples.

In both taste and texture, this simple, classic apple dessert (it’s really a pudding, we call it a cake out of habit, and right now I struggle to call it anything) is balanced to a Sephardic gastronomic sensibility: immensely satisfying (thank you, butter), yet light and delicate without being prissy. It helps that there’s not a ton of cake to contend with. It shows off the vanilla quite well, too, and to my taste that’s a huge plus. All told, it makes a fine finish to a meal that should uplift and inspire with the promise of sweetness and good fortune, like the holiday it celebrates. If you’re so inclined, it tastes amazing with a dollop of fresh whipped cream – also scented with vanilla, of course.

No one can deny that both the French and the Sephardim know a good thing, nor doubt they appreciate one another’s finer sensibilities. Spanish & Portuguese merchants introduced the French to an intoxicating flavor from the New World, and they in turn married it to recipes any Sephardi can easily love for a lifetime. I’d say that’s a pretty good cultural exchange, and certainly one to remember.

2 responses to “An Affair To Remember”