Tales from the dark side

Tough topic today. A history lesson, not about food, but it is about language (and a bit of perversity) pertaining to the Judeo-Spanish experience, so I’ve included it here.

Dear Janet,
I have a bit of a question for you about Sephardic history/culture. I know that the yellow ritual garment worn by the accused “heretics” (especially marranos) during the Inquisition was/is called a sanbenito or sambenito in Spanish. What does this mean? Some translate it as “blessed sack”. People have linked it to Saint Benedict… I assume it refers to Saint Benedict of Monte Cassino, the founder of Catholic monasticism, since the persecution of Jews and heretics was so often linked to the monastic orders, particularly Dominicans and Franciscans. But could it also be derived from the Ladino name for G-d? In a Ladino version of Chad Gadya, I heard G-d referred to as “Santo-Bendicho-El”, i.e. the Holy Blessed One (ha-Kadosh Baruch Hu). I know it’s a strange linkage to make but could it be plausible? – Mark L.

Yikes! No way, Mark. In the 1500’s, New Christians and Old spoke the same Spanish. This one belongs strictly to the Spanish Inquisition, though the convicted heretics (i.e. Jews) condemned to wearing one did coin an enduring expression around the word, which I’ll explain at the end of this post.

Without going into great detail about the various designs (there were several), the ‘saco bendito’ – or sambenito, as it came to be known – as such was an invention of the Spanish Inquisition. The former name does mean ‘blessed sack’ and the latter is a contraction of San Benito, i.e. Saint Benedict.

Anyone found guilty of heresy was required to wear a saco bendito as part of their punishment, either when being led to be burned at the stake, or, if one was not condemned to die, then at all times when appearing in public, for the duration of their punishment. Imagine having to walk around dressed like this for the rest of your life: 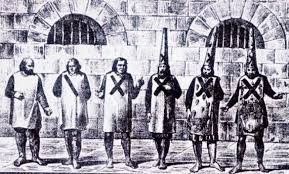 As a written word, ‘sambenito’ is first known to have appeared in the notes of a Jesuit missionary describing the Americas circa 1560, and he used it in a way that suggests it was already part of the Spanish vernacular. (The Inquisition began in 1478.)

Some opine that the saco bendito was loosely (and I use that word loosely) based on the scapular, an unadorned monastic garment smock that hangs from the shoulders – scapula in Latin.  Saint Benedict did wear a scapular, but in his day it served as an ordinary smock to protect one’s tunic while working; it was much later that the scapular became a sacramental garment, and in the Benedictine Order, it also developed special significance in relation to dying.

The Catholic Encyclopedia explains that specifically for lay followers of the Benedictines, “it was regarded as a great grace and privilege [to an oblate or a lay person] to be able to die and be buried in the monastic habit, which was frequently given to the dying or placed on the deceased before burial.”

That’s clear enough for me. I surmise that the architects of the Spanish Inquisition took inspiration not from Saint Benedict and his scapular (which nobody can explain satisfactorily) but from his later followers, twisting a dignified death rite to to suit their own dark purposes.

Autos-da-fé were religious proceedings in which heretics were put to death. When the ‘blessed sacks’ were donned by the condemned, prayers would have been said invoking the name of Saint Benedict, and thus the nickname was coined. One final note: To followers of the Order of Saint Benedict, he is their patron saint of a happy death. What a nice thing to keep telling yourself as they tie you to a stake and set fire to your blessed sack.

With this bitter knowledge, you can now appreciate a Spanish colloquialism also coined during the Inquisition:  poner el sambenito – literally, to put the sambenito on someone, means to lay false blame or accusation.

And so it goes.

7 responses to “Tales from the dark side”