A little Hanukah history, and a little recipe. Or two.

Okay, so here’s the story of Hanukah in a nutshell:  Political infighting between three guys vying for the High Priest spot in Judea resulted in the murder of one of them, and in seriously pissing off their Syrian ruler, Antiochus, because the murdered guy was his pick for the top spot. So Antiochus got mad at all the Jews because of these infighting knuckleheads, shut their Temple down and forbid anyone from practicing Judaism anymore. If you want a time frame, we’re talking the 2nd century BCE. Eventually, Judah Maccabee, the son of a Jewish dissident priest who was hellbent on regaining religious freedom, formed a guerilla army that successfully ousted Antiochus. With Jerusalem now reclaimed, the Jews could reconsecrate their Temple and start worshipping there again.

If you’re unfamiliar with Jewish synagogues then you don’t know that they always contain a light called the Ner Tamid – Eternal Flame – that burns continually as a reminder of the eternal presence of God. In my lifetime I’ve only ever seen the eternal lightbulb, but 2,200 years or so before Thomas Edison, you can be sure oil lamps were de rigeur.    So the Jews now set about re-consecrating the Temple and getting the Ner Tamid burning again.  But there was only enough consecrated oil for one day. I imagine a great debate over whether to light or not to light, with lots of yelling and tempers flying – think Alvy’s parents in Annie Hall and you get my vision of the scene. Well, the pro-lighters won, so even with only one day’s worth of lamp oil they rekindled the eternal flame, and while some folks got busy praying, some others ran out (no doubt half hysterical) to find and consecrate more lamp oil, which wasn’t such an easy task. It took eight days to get that sorted.

Amazingly, that one day’s worth of lamp oil burned straight through the entire eight days. Interpreted as an affirmation of the presence of God, that is the miracle of Hanukah, the Festival of Lights, and that’s what we commemorate for eight days every December, lighting candles each night and gambling for chocolate coins wrapped in gold foil that generally taste as waxy as the candles burning beside them. I guess the gambling bit is all about the big gamble they took in lighting that little bit of oil prematurely.

We also celebrate the festival with symbolic foods that emphasize the use of oil. Funny how all anyone ever used to think of was fried potato pancakes, but there you go. They were novel for centuries, and let’s face it, they’re delicious. That said, any Ashkenazi latkes – potato & onion pancakes – I ever ate growing up were traditionally served with applesauce and, in my experience, traditionally followed by a severe case of heartburn. The Sephardic version, keftes de prasa, is made with leek rather than onion, and is minus the heartburn. (What can I tell you; it’s our own little Hanukah miracle). 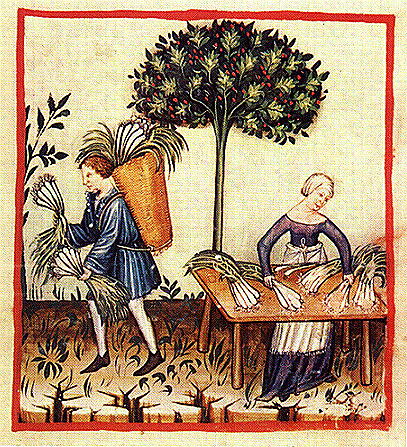 Leek seller in a 14th century image by an unknown master.  This image is licensed under Public domain via Wikimedia Commons.org

We also make bimuelos, which I’m still working on. If you’ve been to Spain and eaten buñuelos – deep-fried, moist, puffy donuts rolled in granular sugar – then you’ve eaten bimuelos.

One more little story before I start rolling out recipes. Like so many houses in Spain, the one I rent has no central heating and one very inefficient fireplace. (It was built to be a summer cottage), so I bought a fancy ceramic stove that runs on butane. The day I brought it home I fired that baby up and got the whole house nice and toasty in no time flat. Saved! But the butane tank ran out after only five days. And the one after that, too. That’s all they last. So much for my economical heating solution. I was beside myself, because winter in my house is a long, damp affair. Well, last week I replaced the empty tank, and the new one – same size, I promise – has been going full throttle for a good ten days now. I will have a warm and happy Hanukah.

I wish you  the same!

17 responses to “A little Hanukah history, and a little recipe. Or two.”